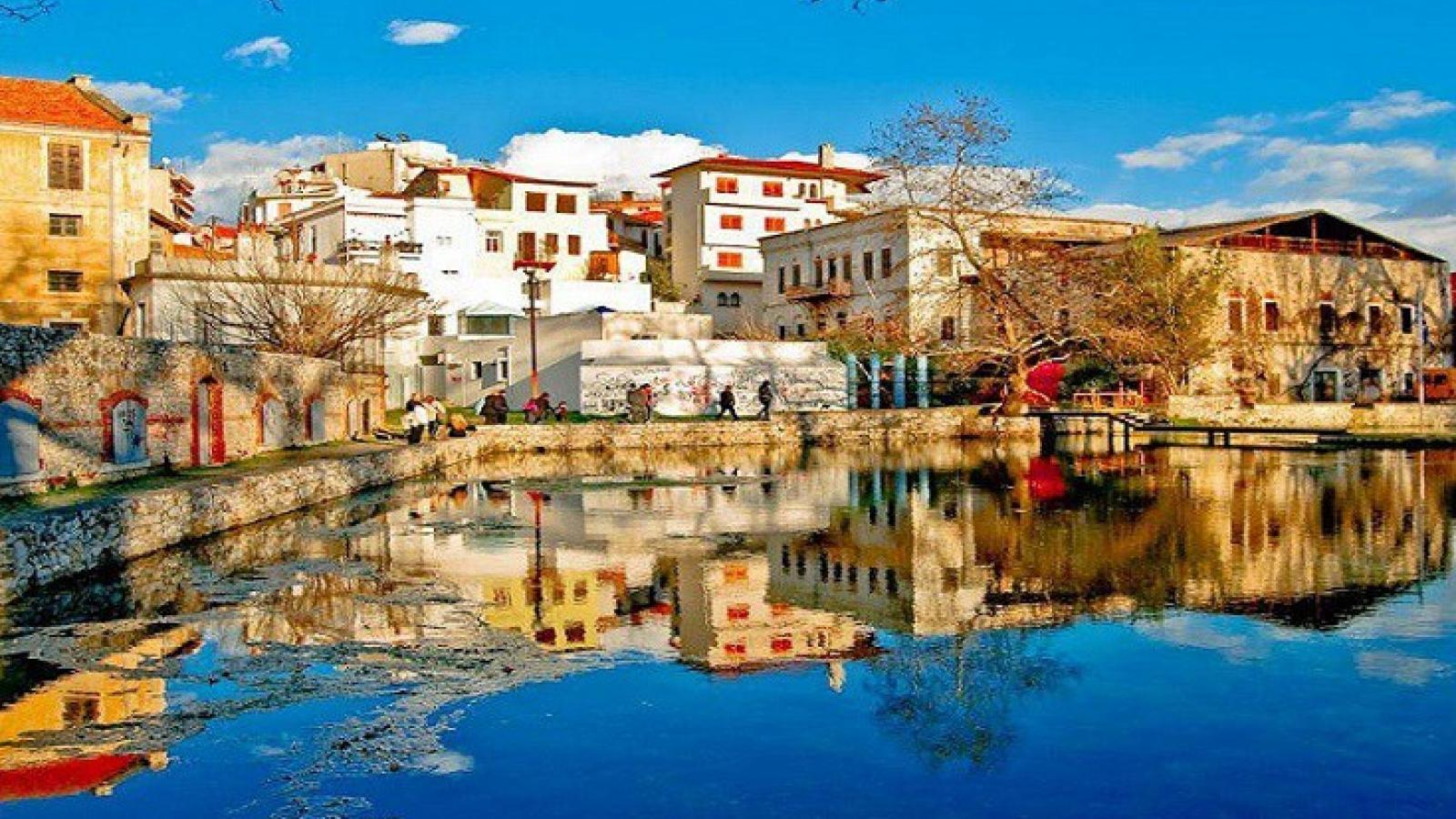 Visiting East Macedonia at the northern part of Greece you will discover a completely different environment. Mountains and forests, rivers and lakes are composing a dream setting full of history and tradition. It is located at a distance of 650km NE of Athens and 150km NE of Thessaloniki.

Its name has really nothing to do with “Drama” but with Hydrama which means full of water.

And indeed, bubbling springs flow into canals and ponds watering ancient trees at Agia Varvara (santa Barbara) park, one of the most beautiful city parks of Greece.

Its history is long. In the middle Byzantine Period (9th-13th centuries) Drama was a fortified city with a castle and it used to be a commercial and military junction. In the late 19th century, tobacco production and trade, the operation of the railway (1895) and improvement of the road network towards the Port of Kavala, led to an increase in the population of the city and to the enhancement of the commercial activity.

Today is a modern city, full of life, where the old tobacco warehouses have been converted into luxury hotels and the memories of grandparents from their roots of Asia Minor are very much alive in the wonderful recipies of the various charming restaurants all around. Delicious local products well known all over Greece as well as some of the best wines of the area will make your trip a gastronomical experience.

Walk along the streets of the commercial center, visit the tomb Cluster from the Iron Age and the Macedonian Tomb that proves that the area was inhabited during historic times. Spend the day at Agia Varvara Park, an idyllic location in the city centre with fountains, small lakes and waterfalls, tavernas, an outdoor theatre and leisure venues. There you will see the traditional watermills and the multi-storey tobacco warehouses, reflecting in the waters of the Lake.

If you are interested in history, the Archaeological Museum, situated by the verdant Municipal Garden includes noteworthy finds from the area, dating from prehistoric until recent years. The mammoth tusk found at the entrance of Maara Cave (Aggitis Springs) is particularly interesting. Also the Ecclesiastical Museum, housed in a modern wing of the Bishop's Mansion includes objects of ecclesiastical art. Complete your tour with a visit to Agia Sophia Byzantine Church built at the 10th century. Around the Church you can see the ruins of the Byzantine Walls also originally built in the 10th century. Near the walls there is the Taxiarxhes Chapel, built during the Palaiologos Family era.

At the end of the day walk to Korylovos Hill covered by pine-trees, with a tourist pavilion, sports facilities and a marvellous view.

What to do in Drama

For Film lovers, every September, an International Short Film Festival takes place in Drama. Established in 1978, the festival brings cinema lovers from all over Greece and abroad and the proposition becomes even more attractive with the addition of photography, painting and sculpture exhibitions, book presentations, concerts and cinema workshops (www.dramafilmfestival.gr).

Other events include "Eleftheria", cultural events in commemoration of the city's liberation, at the end of June or beginning of July.

"Anastenaria" (walking on fire by refugees from Thrace), in the village Mavroleki, held on the name day of Saint Constantine and Helen, on May 21st.

Dionysian events in the villages of Monastiraki and Xiropotamos.
If you want to celebrate the rites like a local, come to the area during the 12 days of Epiphany. That’s when the local villages around Drama stage Dionysian rites involving all manner of costumes and masks, dancing, singing and giant bells.

Choristi 5km SE. This location has been inhabited since Roman times and has been linked to economic development since the 19th century, thanks to tobacco farming and trade. It has been distinguished for its cultural tradition. It is worth seeing the Church of Isodia tis Theotokou (1906) with six Icons by the significant Greek painter K. Parthenis, the reading room of the same period and the neoclassical buildings of the 1920’s. Visitors flock to this village on Ash Monday to participate in the Carnival events.

Monastiraki, 6km N, on the eastern foot of Mt Falakro is known for the marble craftsmen originating from the village, and also for a very old custom called "Arapides" with roots going back to the worship of Dionysus, revived every year on January 6.

Adriani 7km E. This is a historic town with a human presence since antiquity, shown in the ruins of the first castle in the area, at the location of Ai-Giannis. Today, it is famous for its excellent wines and Tsipouro. You may visit the wineries of the area (K. Lazaridis, Manoletsaki, Oenogenessis and N. Lazaridis) and follow a guided tour of the production facilities, in the cave and the degustation rooms, in order to taste the international award winning wines. Further to the East there is the village of Agora, featuring an organised park of predatory birds.

Doxato, 10km SE is a historic town with well preserved neoclassical buildings that reached the peak of its development in the 19th century thanks to tobacco production and trade. It is worth visiting the renovated Schools of 1908, the Agios Athanassios Church (19th century) with beautiful frescos and an icon screen, as well as the Municipal Garden. On May 2, during the Agios Athanassios Fair, among other festivities, there are traditional horse races with thoroughbred horses.

Agios Athanassios 12km SE. This is a small rural town close to Kefalari. It is worth visiting the leisure area, under the shadow of a plane-tree, in Voirani Springs (between the villages of Ano and Kato Kefalari). An ancient grape press for wine production was discovered near the springs.

Karantere, a living monument
The view before you has  fairy tale written all over it; 70,000 hectares of vivid red fir forest on the Bulgarian border in Macedonia, some of the trees reaching as high as 60m. The locals call it Karantere, foresters call it an “authentic and unique” natural monument and for you, it will be nothing short of incredible.

Angitis cave and the underground river
Water flowing down the Kato Nevrokopi valley disappears into the ground for a dark and mysterious journey, only to re-emerge at this secret exit to resume its course down to the plain. You are at the mouth of Angitis cave. Partially unexplored, the rare underground river  before you once watered a landscape inhabited by mammoths and rhinos.

Fraktou’s virgin beauty
How many places on the planet are still pristine? One of them is the primaeval forest of Fraktou in Drama. Listed as a natural monument since 1980, it is the most important of the three remaining primaeval forests in Europe and the second largest in area.

In this corner of Northern Greece, you’ll take a majestic walk in the shade of two sheer rock faces. The gorge starts at the village of Pyrgos and unfurls to where the slopes of Mt Falakro become practically vertical. It meanders some 12km between high rocks and dense flora and is a refuge for a wealth of wildlife species. An amazing experience.